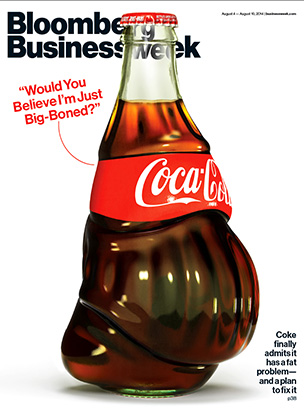 First, Coca-Cola is losing its mojo. Sales volumes of the bitter-sweet liquid confection slumped last year, especially in the critical take-away market, with teenagers drinking less than ever: part of an trend away from sugary fizzy drinks generally. Last week the SMH reported that “Half the population of Australian teenagers drank a Coca-Cola over the past four weeks. That might seem like a high proportion, but five years ago it was closer to 70 per cent.”
With fizzy drinks major contributor to the obesity epidemic, this is hopeful news.
BTW, it’s interesting to notice that Cola-Cola is not standing still, but wholeheartedly diving into the only mindset that might save it – innovation.
Second, indigenous smoking rates have dropped 10% in the past decade, down to 41% (though not in remote communities). While still high compared to the national non-indigenous rate of 15.6%, it’s a big change. Quitting is so hard to do: it’s a pivotal moment in taking control of one’s life and implies much about changing aspirations and improved self-efficacy, as well as the impact of numerous anti-smoking efforts targeting indigenous people (like Deadly Choices and Keep it Corka).
Both these changes are dramatic, in excess of generational change, and likely to make the job of change makers (who work best on the self-efficacy side of the change equation) easier.
Humour in surprising places
Yay! It’s great to see humour being used more often by sustainability educators. Here are some delightful recent works.
From Port Stephens council:
“Take a look at these little beauties” says Steve Bernasconi. https://www.youtube.com/watch?v=AEAoxPFQwbw


A highly skilled team tracks the moronic rubbish dumper “…a simple creature of habit with an incredibly low IQ…” https://www.youtube.com/watch?v=UeFTpNVFYoU

And from Wagga Wagga council, here’s the Recycling Rap, from Carly, Alice and the enviro team. Be cool and Recycool!
http://youtu.be/MpY3Ku3_dAk

And from Yarra Valley Water, this video from their Choose Tap campaign went viral. It showed a shopkeeper trying to sell Organic Fresh Air, February Moonlight and boxed sunlight.
Customer in bottled air shop: “This is ridiculous. I Could just go outside and breathe the air.”
Retailer: “Kinda like buying bottled water.”
http://www.yvw.com.au/home/inyourcommunity/choosetap/

The campaign builds humour into a comprehensive strategy involving buzz, partnerships, and system change.
[Their aim: make tap water a brand sexier than bottled water. In addition to the viral video, they rolled out a smart phone app locating water fountains, a schools program with Tap Man, branded bottles and restaurant programs. And, critically, they set out to modify people’s environment by partnering with councils to roll out water refill stations.]
Seriously…humour disarms people and opens them to messages that would otherwise be confronting, irksome, or just boring.
Humour works especially well in this context because it breaks the unwritten rule that government is supposed to be safe and dull. If every government communication was hilarious, humour probably wouldn’t stand out so strongly. But because government is so relentlessly predicable even a lame attempt at humour shines out brightly.
“That’s bloody atrocious”
What goes viral? Humour and delight, yes. But also righteous outrage. Here’s an example, also from Port Stephens, where one reasonable man speaks for so many in his Youtube video on illegal dumping in bushland…it got picked up by local television and print news and has 23,000 hits which is pretty remarkable considering the production values.
Here is the video on youtube http://youtu.be/jBr6ix50QkI 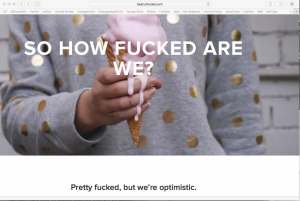 Two sassy young Melbourne women, Vanessa Morrish and Caroline Shields, show the rest of us how to do climate change communication, or, in their terms, to go unfuck ourselves.
“Be an unfucker and change one thing.”
It’s a lesson in how nimble, uninhibited, left-field activists who don’t try to please everyone can slay mainstream campaigns in the act of addressing an audience. Launched in late 2014, their site had 14,000 visitors in the first few weeks. http://www.sohowfuckedarewe.org
Which reminds us that the most persuasive speakers not only break the rules, but are also similar to their audience.
Concept of the month: “dispositional attitude”
It seems some people are “born hatin”.

Recent research shows that a small proportion of the population have a default disposition to be either very happy or very unhappy about almost everything.
There’s evidence that across the population this “dispositional attitude” forms a bell-curve, with a small number of insanely happy or dementedly miserable people at each end.
Interestingly the default disposition also predicts whether one is an active or passive person, or has a narrow range of interests. It appears haters tend to have low agency. Perhaps they hate because they are defeated in so many areas of their lives.
So don’t freak out about the curmudgeons you meet. They don’t just disagree with you, they disagree with just about everyone else too!
Upcoming Changeology and Facilitation Skills workshops
Lastly, a reminder about the Changeology and Facilitation Skills workshops, presented by me (Les Robinson) in April and May. All details and booking are at www.enablingchange.com.au 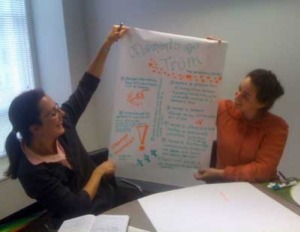